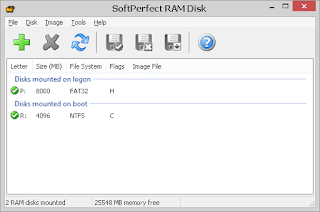 The SoftPerfect RAM Disk is a high-performance RAM disk program designed to help you have a disk on your computer entirely stored in the memory.As the memory is much faster than physical hard disks, it makes sense to store temporary data on a fast in-memory disk to achieve a higher performance. Whatever your job is, read on to find out what a RAM disk can offer you.

The program creates a virtual disk residing in the computer RAM accessible in Windows Explorer and other applications, allowing you to store any temporary information on this disk.

Modern computers are equipped with at least 1 GB of RAM, however most of the time there is a lot of unused memory that could be used as a high-performance alternative to the slower hard disk storage.

This product lets you create any number of virtual RAM disks limited only by the memory available. You can also work with on-disk images and RAM disks associated with an on-disk file, that ensures your data is preserved between sessions.